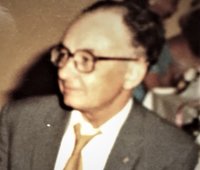 George H. Coates 94 of East Haven passed away February 8, 2021 at home. He was born August 13, 1926 in East Haven to Clyde Sr. and Marion (Redman) Coates. George is survived by his nephew, Richard Coates (Frances) of North Haven and three nieces, Sheila Magnotti (Mark) of North Haven, Deborah Byers of Branford, and Joanne Diaz (widow of Nicolas Diaz) of West Haven. He is also survived by eight nieces/nephews, Richard Magnotti, Christopher Byers, Benjamin Byers, Kimberly Byers, Kyle Byers, Michael Whalen, Cassandra Diaz, and Josiah Diaz. George is preceded in death by his parents and brother and sister-in-law, Clyde Jr., and Shirley (Daggett) Coates. George was a 1944 graduate of East Haven High School and a life-long resident of the town. He was a US Army veteran of WWII. George worked as a mechanic for the Coca-Cola Company for many years. He was a licensed pilot, who enjoyed flying and boating. He also loved to travel by car and visited most of the states in the U.S. George had a reverence for nature and wildlife. He gave generously to many animal preservation charities. He will be greatly missed by everyone who knew him. Family will receive mask wearing friends on Saturday, February 13, 2021 from 9 AM until the time of service at 11 A.M. in the Clancy-Palumbo Funeral Home (Clancy Funeral Home), 43 Kirkham Ave., East Haven CT with burial to follow at East Lawn Cemetery in East Haven.