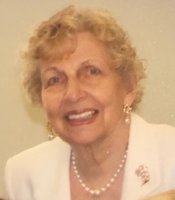 Rosine Genevieve (Ambard) van Oss May 13, 1925-March 9, 2021 Rosine Genevieve (Ambard) van Oss of Williamsville NY and most recently of North Branford CT, retired freelance translator, former French teacher, and librarian died on Tuesday, March 9, 2021 surrounded by family after a 1.5-year period of declining health at age 95. Born in Strasbourg, France; Rosine was a refugee during World War II, and she was a Girl Guide (European Girl Scout) assisting in the resistance effort. Rosine earned a Bachelor of Fine Arts from the École des Beaux-Arts in Paris, France, a Master of Science in Mathematics, a Master of Library Science, and a Master of Arts in French and Spanish as second language; all from the University at Buffalo. She earned a Certification by the American Translators Association for English into French, a Librarian Certification issued by the Medical Library Association, and a French Language Medical Technical Division Certification. In 1963, Rosine emigrated from France to the United States of America with her husband Carel, and son James; to New York City. In 1965, Rosine and her family moved to Milwaukee, WI where her daughter Anne was born. In 1968, they moved to Buffalo, NY where her husband was Associate Professor of Microbiology and Head of the Immunochemistry Laboratory at The State University of New York at Buffalo School of Medicine. Her daughter Vivian was born in Buffalo in 1968. In 1969, she, her husband, and son became US citizens. Rosine was fluent in French, English, Spanish, Dutch, and German. She worked at the University at Buffalo in the medical library, at The Calasanctius School and St. Joseph's Collegiate Institute in Buffalo, NY. She published 2 papers and translated an entire medical textbook from English into French. After retiring from teaching around the age of 60, she founded the French Translation Bureau, an independent company that provided technical translation services from English to French. She embraced technology and learned to roll with all the emerging computer advances over the past 30+ years. Her incredible strength and dedication enabled her to operate the French Translation Bureau until age 93! Rosine enjoyed Rosemåling, sudoku, sewing, antiquing, collecting lace, and silver. She was a past President of the Alliance Français de Buffalo (AFB) and very active in the Francophone community in Buffalo, NY. She originated the AFB newsletter “Les Nouvelles” many years ago with her personal computer. She enjoyed participating in the annual AFB Christmas baking competition for the buche de Noël. She loved spending time with her grandchildren and attended all their significant events. Rosine died peacefully with Vivian by her side at 9:05 AM at her nursing home: Evergreen Woods in North Branford, Connecticut. Rosine is survived by her 3 children: James (Rosanne Frandina), daughters Anne Roach, Vivian (Mark) Gentil, and 7 grandchildren: Timothy, Daniel, and Katherine Van Oss; Stephen, Rachel, Matthew, and Alyssa Gentil. She was predeceased by her husband of 67 years; Carel Jan van Oss, older brothers: Philip, Dominique, and Victor Ambard, and older sister Marie Jose Oaury; and is also survived by many nieces and nephews living in Europe. Her amazing kindness, quiet elegance, and grace is truly an inspiration to all who knew her. Family and friends are invited to meet and attend a Mass of Christian on Friday, April 9, 2021 at 6 P.M. in St. Margaret Catholic Church, 24 Academy Street, Madison CT. Burial will be private at a later date. In lieu of flowers, please make donations to Madison Youth and Family Services https://www.madisonct.org/812/Youth-Family-Services in memory of Rosine van Oss.