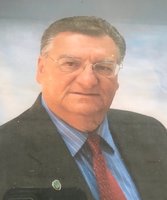 Robert “Bob” Limoncelli 77, lifetime resident of East Haven, passed away peacefully with his family by his side on March 13, 2021 at CT Hospice in Branford. He was born June 9, 1943 in New Haven to the late John and Annette (DeMarco) Limoncelli. He is survived by his loving wife of 54 years, Shigeko (Takizawa) Limoncelli, two dedicated daughters, Chelsea Gorczyca (Grant) of Higganum and Tasha Limoncelli of East Haven along with two grandsons he adored, Kyle Miller (Shannon Kelly) and Tyler Miller. Robert is also survived by his devoted brother, Matthew Limoncelli (Carmel) of East Haven. Robert proudly served his country in the US Air Force during the Vietnam conflict in the 348th combat support group. He was stationed in Fukuoka Japan where he met his wife, Shigeko. Upon returning home, he spent a majority of his career as an agent for John Hancock with over 40 years of service. He presently is the proprietor of DAD Real Estate. Robert was very active in East Haven civic organizations such as the Chairman of Economic Development Commission, Planning and Zoning Commission, WPCA, Board of Constables, Chairman of the East Haven Chamber of Commerce, founder of the East Haven’s Lions Club, and a merit award recipient. Besides his family, he enjoyed traveling to Stowe, Vermont, NASCAR, watching UConn basketball, lunches with his brother Matt, boating, watching NY Yankees baseball and last but not least, winning the bocce championship in the Tuesday night league. Family will receive mask wearing friends from 4 to 7 P.M. on Wednesday, March 17, 2021 in the Clancy-Palumbo Funeral Home (Clancy Funeral Home), 43 Kirkham Ave., East Haven. A Mass of Christian Burial will be celebrated on Thursday, March 18 at 11 A.M. in St. Pio of Pietrelcina Parish at the Church of St. Vincent de Paul, 80 Taylor Ave., East Haven (Please go directly to the church). Burial to follow with Full Military Honors at East Lawn Cemetery, East Haven. The Limoncelli family would like to thank the nurses at Connecticut Hospice for their kind and compassionate care. In lieu of flowers, please make donations to Connecticut Hospice, 100 Double Beach Rd., Branford CT 06405 or the East Haven Food Pantry, 39 Park Place, East Haven CT 06512 in memory of Robert Limoncelli.