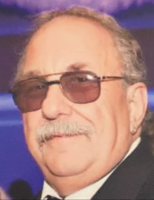 William B. DiCrosta Jr., 71, of East Haven passed away July 21, 2022 at Yale New Haven Hospital. He was born September 24, 1950 in New Haven to the late William Sr. and Lucy (Esposito) DiCrosta. William is survived by his loving wife of 43 years, Raphaella “Dee” DiCrosta and children; Lisa DeLise (Charlie) of North Haven, Wayne Magliulo of East Haven, Jessica Huelsman (Ken) of North Haven, Robin Litton (Roy) of FL., Heather White (Don) of AZ., and Billy DiCrosta (Neil Fuentes) of New Haven along with thirteen grandchildren, four great grandchildren and nieces and nephews. He is also survived by his sister, Carol Massey (Ron) of FL., and Mark DiCrosta (Amy) of Wallingford. Bill served in the Army for seven years, became a Drill Sergeant, and was Air Borne. He later also served as a leader in the young marines for his son Wayne and his other marines. He married his beloved wife of 43 years in 1979 where they blended their two families and had their youngest son Billy making a total of six kids. They often joked that they were the real “Brady Bunch” and ran their family life by saying that “the only steps in this house go to the second floor”. He was a building supervisor for Carabetta Properties and owned a DJ business with his best friend John Barbara. Bill always had a passion for classic cars and those "Oldies but Goodies". He first started DJ’ing with his son Billy and the Mendola Family in the 90’s. Later he was able to bring his two passions together by Dj’ing most of the local car shows for years and donated his time to numerous benefits such as The Wounded Warriors. Seven years ago he finally had his dream come true when his wife was able to buy him a classic 1950 DeSoto to restore. He and his friends spent the next 7 years restoring it. He passed before ever being able to take his DeSoto to a car show but his family plans on honoring him by bringing it to the East Haven Fall Festival Car Show later this year. He also enjoyed spending time with his beloved grandchildren and great-grandchildren. He truly enjoyed seeing them smile and watching them grow! He carried great pride in his family and leaves behind many beautiful memories that will last a lifetime within their hearts and minds! The family would like to extend their gratitude to his cardiologist Dr. Glenn Henry for his heartfelt devotion to giving Bill more years to spend with his loved ones. Family will receive mask wearing friends from 4 to 7 P.M. on Friday, July 29, 2022 at the Clancy-Palumbo Funeral Home (Clancy Funeral Home), 43 Kirkham Ave., East Haven. A Mass of Christian Burial will be celebrated on Saturday, July 30 at 10 A.M. in St. Pio of Pietrelcina Parish at the Church of St. Vincent de Paul, 80 Taylor Ave., East Haven with Committal and US Military Honors to follow at Greenlawn Cemetery, Tyler Ave., East Haven. In lieu of flowers the family asks for any donations to be made to The Wounded Warrior Project or St Jude’s Children’s Hospital in memory of William B. DiCrosta Jr.