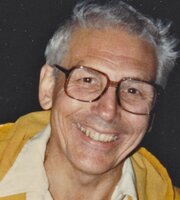 Robert E. "Bob" Handschumacher, 94, Professor Emeritus, Yale University, died September 28, 2022, at his home in Guilford, CT. Born in Abington, PA, he was the third son of Gustav Handschumacher and Emma Streck Handschumacher. In grade school, his life began to center on science well before he won a national science prize. When his childhood family summered in Wildwood, NJ, he fell in love with sailing and dreamed of one day owning a boat that could take him anywhere in the world. He would make that happen. He served in the Army-Air Force, enlisting just before the end of WWII. With his first wife, Elizabeth Grafley (d. 2017) he raised two sons, Kurt and Mark Handschumacher. He earned his BS in chemical engineering at Drexel Institute, his MS and PhD in biochemistry at the University of Wisconsin. After post-doctoral work at the Lister Institute in London and at Yale University School of Medicine, he joined the Yale faculty, where he taught and ran a research laboratory until his retirement. He held the American Cancer Society Professorship from 1977-1995. He made numerous contributions of fundamental medical importance for cancer treatment (esp. leukemia and skin cancer) and immuno-therapy. He isolated a protein termed Cyclophilin that binds the potent immunosuppressant drug Cyclosporin A, used to prevent rejection of transplants. His research on how this drug acts paved the way for development of more effective and less toxic drugs. He was highly regarded as a teacher and mentor at Yale, and many of his students and fellows went on to distinguished careers in science and medicine. Over his career, he served in many administrative roles, both within the University and in the scientific community – director of the Yale Division of Biological Sciences, chairman of the Yale Department of Pharmacology, secretary/treasurer of the American Association of Cancer Research, and member or chairman of numerous committees, commissions, and boards. In 1981, he married his second wife Joan Goddard, who shared his passion for the sea and sailing. Together they traveled widely and logged many miles of blue water sailing, including several Trans-Atlantic crossings and explorations from Newfoundland and Labrador to the Amazon, throughout the Caribbean and the Mediterranean, and on the Pacific coast to Glacier Bay in Alaska. After retirement, Bob also poured himself into volunteer activities, doing trail maintenance with the local Westwoods Trails, and serving as a council member and treasurer of his church. Over a period of 15 years, he worked to maintain a home base for a struggling church and its summer day camp in the Hill Section of New Haven. Even when impaired with MCI and then Alzheimer’s disease, he never stopped needing to help people, reflecting a faith and ethic formed in his early childhood. Even in his final weeks he still was slipping into helping/teaching mode. He was predeceased by his brothers – Albert Handschumacher and Richard Handschumacher. He leaves his wife Joan; son Kurt and his wife Craig, son Mark, and granddaughters, Misha and Shana, and their mother, Bronwen Morris. A memorial service will be held at Tabor Lutheran Church in Branford, CT, on November 12, at 11:00 AM, followed by light brunch in the church's Fellowship Hall. If you wish to make a memorial charitable donation, please consider: *Cure Alzheimer’s Fund, http://www.curealzfund.org 34 Washington Street., Suite 310, Wellesley Hills, MA 02481 *International Rescue Committee http://www.rescue.org P.O. Box 6068, Albert Lea, MN 56007-9847 *Tabor Lutheran Church, 45 Tabor Drive, Branford, CT 06405