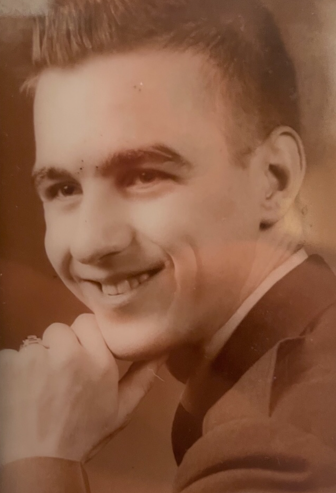 Please share a memory of Wayne to include in a keepsake book for family and friends.
View Tribute Book
Wayne Grindle 82 of East Haven passed away July 26, 2021 at Apple Rehab in East Haven. He was born February 8, 1939 in Castine, Maine to Arlington and Elva (Leach) Grindle. Wayne is survived by his loving and devoted wife of 60 years, Anita (Chirco) Grindle and three children, Wayne R. Grindle Jr. of East Haven, Carla A. Coppola (Louis) of Cheshire and David J. Grindle (Sharon) of Wallingford along with four grandchildren he adored, Violet Grindle, Janine Coppola, Nicholas Grindle and Kaitlyn Grindle. He is also survived by two siblings, Carol Gilbert of Northfield, Maine and Russell Field, Jr. (Sharyn) of Orland, Maine. Wayne is preceded in death by his parents and sister, Lucy Field. Wayne graduated from Bucksport High School in Maine, and then later graduated from Yale University’s – Institute of Far Eastern Languages where he learned to speak Chinese for the US Air Force and finally finished his education with an accounting degree from Quinnipiac College. He was part of the Air National Guard from 1956-1957 and the US Air Force from 1957 to 1960 where he served a tour in Taiwan. After serving his country, he was employed by the New Haven Gas Company Business Office, the City of West Haven Comptroller’s Office and the State of Connecticut, Dept. of Mental Health and Corrections. He was a former Grand Knight and Treasurer of the Knights of Columbus in East Haven and an usher at St. Vincent de Paul Catholic Church. Wayne loved to read and play cards, but he cherished the time with his wife and family above all. Family will receive friends from 4 to 7 PM on Thursday July 29, 2021 at the Clancy-Palumbo Funeral Home (Clancy Funeral Home), 43 Kirkham Ave., East Haven. A Mass of Christian Burial will be held on Friday, July 30 at 11 A.M. in St. Pio of Pietrelcina Parish at the Church of St. Vincent de Paul with Committal and Full Military Honors to follow at All Saints Cemetery in North Haven.
Thursday
29
July

Share Your Memory of
Wayne
Upload Your Memory View All Memories
Be the first to upload a memory!
Share A Memory
Send Flowers