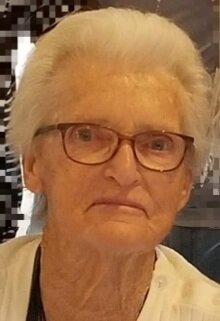 Please share a memory of Shirley to include in a keepsake book for family and friends.
View Tribute Book
Shirley Cacace 93, of East Haven passed away surrounded by her family on December 10, 2021. She was born June 20, 1928 in New Haven to Mary (Parret) Breen. Shirley is survived by her two devoted daughters, Marie Marguy (Toney) of North Haven and Shirley Forte (Ed) of East Haven along with four grandchildren she adored, Cheryl Franklin (Shane), Ralph Marguy (Melissa), Renee Dominguez (Manuel) and Melinda Forte. Shirley is also survived by her pride and joy, the great grandchildren, Kayla Franklin, Shane Franklin Jr., Arianna Franklin, Jaelyn Johnson, Stella Marguy, Archer Marguy, Gianna Dominguez and Gabriella Dominguez and a sister, Beatrice Breen O’Neil of New Mexico. Shirley is preceded in death by her mother, husband, Ralph Cacace, grandson, Toney Marguy III, and two sisters, Barbara Palmer and Dorothy Belous. She worked as an LPN for 30 years until her retirement in 1983 from Yale. Shirley was an incredible, selfless woman who adored her family. She loved the holidays and always made them special with her amazing cooking. She loved spending her summers at the beach with her grandchildren and great grandchildren. Shirley was the matriarch of the family and the glue that held everyone together. She was a woman of great faith and always saw the good in everything. Her love and light will be missed by everyone who knew her. Family will receive friends from 4 to 7 P.M. on Wednesday, December 15, 2021 at the Clancy-Palumbo Funeral Home (Clancy Funeral Home), 43 Kirkham Ave., East Haven. Her funeral procession will Clancy-Palumbo Funeral Home on Thursday, December 16 at 10:40 A.M. for a Mass of Christian Burial at 11 A.M. in St. Pio of Pietrelcina Parish at the Church of St. Bernadette, 385 Townsend Ave., New Haven with Committal to follow at All Saints Cemetery in North Haven. Donations may be made to the Smilow Cancer Center, 35 Park Street, New Haven CT 06511 in memory of Shirley Cacace.
Wednesday
15
December

Share Your Memory of
Shirley
Upload Your Memory View All Memories
Be the first to upload a memory!
Share A Memory
Send Flowers