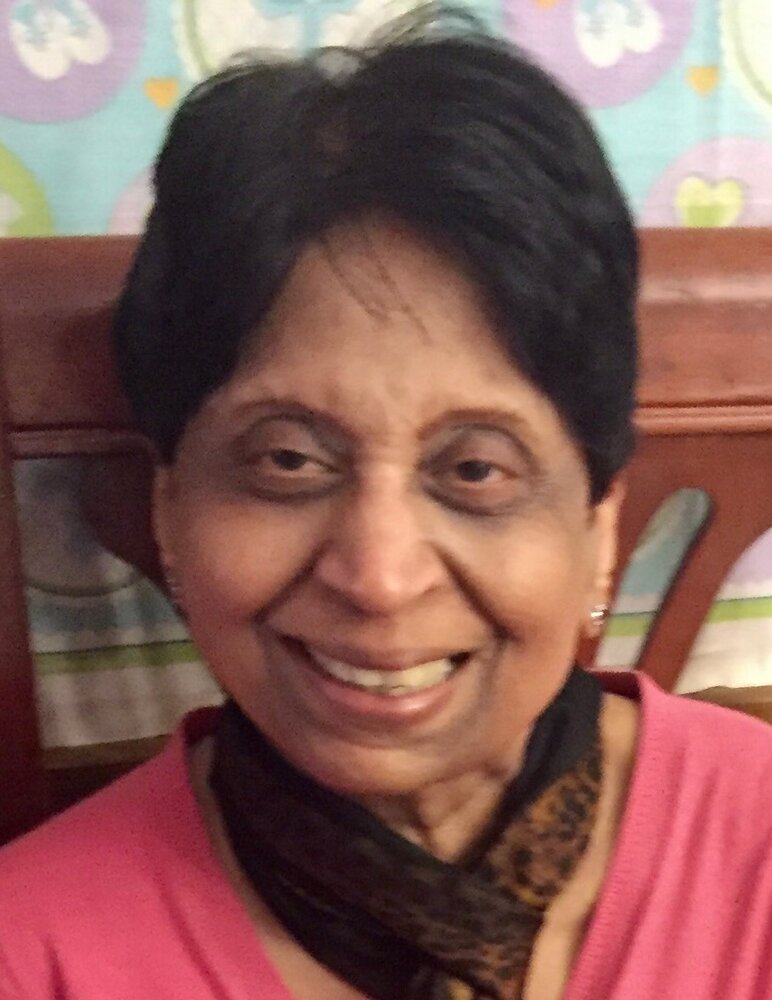 Please share a memory of Deepa to include in a keepsake book for family and friends.
View Tribute Book
Deepa Shirali, born into the world as Sujana Nayampalli, died on December 21, 2021, at the age of 70 years. She is survived by her beloved daughter Anushree Shirali Nolasco and son-in-law Dario Nolasco, her treasured grandsons David and Gabriel, her many cousins, nieces, nephews and their families, and good friends that she regarded as family. Also surviving her are two canines, Leo and Lucy, who lay at her feet during her illness. She was born in Bombay, India, as the youngest child of the late Ananthrao and Tara Nayampalli and sister of the late Sudhir, Suresh (Sunanda), and Sunil (Usha) Nayampalli. Of her childhood, she would say that they lacked material things but had love beyond measure. That upbringing formed her into a strong yet sensitive woman. She was shy when she first met Chaitanya (Chet) Shirali, a military officer, but became outspoken when he suggested that she’d look better with contacts and shorter hair. He begged his way to a second date and they ultimately married in a ceremony for which she wore glasses and long hair. They lived a life of sacrifice in India along with moments of happy adventure after they welcomed their only child, Anushree. In her mid-30s, Deepa immigrated to the United States with her then 10 y.o. daughter, anticipating that her husband would join them a year later. The year turned into five for reasons beyond their control and meanwhile, this now de facto single mother worked two jobs to support her family. She did this without complaint and eventually met with professional success, because of her ability to adapt to changing circumstances to gain new knowledge and skills. From a background as an administrative assistant, she transitioned into grants management, handling multiple grant submissions for biomedical research, most recently at Yale Pharmacology. While her career was important to her, what mattered most was family. In 2003, her husband of 28 years died from the same pancreatic cancer to which she eventually succumbed. Throughout his ordeal, his courage was matched only by her devotion. His death, far from leaving her sad or bitter, made her an even more loving and generous woman. Nowhere was this exemplified more than her absolute adoration of her grandsons. She was their beloved “Ammama” and just a few weeks prior to her death, she was still ironing their clothes, soothing their hurts, and most importantly, loving them without measure. She leaves behind for her family a treasure: the belief that in Christ, all will be made well. Her desire to follow Christ, her love of the Blessed Virgin Mary, and her admiration of countless Saints made her happy even in the midst of serious illness. Mom, may that faith give us the peace of knowing that you are at peace. David and Gabriel say it best, “Ammama, we love you to the moon and back plus infinity.” The family would like to thank her numerous health care providers who treated her with compassion, particularly the nurses at the Smilow Cancer Center who were her unsung heroes. All are welcome to meet and attend a Mass of Christian Burial on Wednesday, December 29, 2021 at 10 A.M. in St Mary’s Church, 5 Hillhouse Ave., New Haven, CT. Committal will be private and under the care of the Clancy-Palumbo Funeral Home, 43 Kirkham Ave., East Haven. In lieu of flowers, please consider a donation to the Little Sisters of the Poor (https://tinyurl.com/LSPCT) or the Community Soup Kitchen (https://tinyurl.com/CSKNH).
Wednesday
29
December

Share Your Memory of
Deepa
Upload Your Memory View All Memories
Be the first to upload a memory!
Share A Memory
Send Flowers