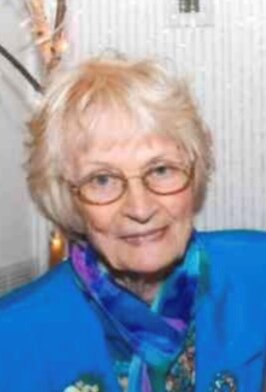 Please share a memory of Hildegard to include in a keepsake book for family and friends.
View Tribute Book
Hildegard (Braun) Cartier 93 of East Haven passed away April 9, 2022 at Branford Hills. She was born October 21, 1928 in Munich, Germany to Wolfgang and Gertrude (Steiner) Braun. Hildegard is survived by her children; William Cartier Jr. of East Haven, Mary Cartier Wnek (Robert) of Madison, Linda Cartier Tomasiello of Wallingford and Janet Cartier Donnelly (Kevin) of East Haven. Hilda "Oma" is also survived by her nine grandchildren; Acacia Cartier, Kira Cartier; Kimberly Lange (fiancé’, Bill Allegretti), Jason Wnek, Eric Wnek (Ula), Michael Wnek (Melissa;), Katie Tomasiello MacLean (Richard;), Connor Donnelly and Justin Donnelly along with thirteen great grandchildren and one great-great granddaughter. Hildegard is preceded in death by her parents, husband, William J. Cartier Sr. (1997) and a brother, Wolfgang Braun. Growing up in Germany she was an avid skier in the mountains of Bavaria. Hilda was a war-bride of William J. Cartier Sr. who served in the US Army during the WWII and Korean wars. Hildegard enjoyed classic rock music, going to the casino, playing pinochle, baking and cooking for family gatherings/holidays, especially her German recipes, homemade bread, everything was made from scratch. She loved traveling back to her hometown in Germany, (especially during Octoberfest) as well as getaways in Northeast (US) Cape Cod, MA, Ogunquit, ME and the mountains in New Hampshire/Vermont. She was a home daycare provider while raising four children. Her pride and joy were her beautiful flowers around the outside of her home along with gardening. Hilda also loved to sew making clothes for her children. She was a member of St. Vincent de Paul Catholic Church. A Catholic service was privately held and burial at East Lawn Cemetery in East Haven. All Services are under the care of the Clancy-Palumbo Funeral Home (Clancy Funeral Home), 43 Kirkham Ave. East Haven.
Online Memory & Photo Sharing Event
Online Event
About this Event

Look inside to read what others have shared
Family and friends are coming together online to create a special keepsake. Every memory left on the online obituary will be automatically included in this book.
View Tribute Book
Services for Hildegard Cartier
There are no events scheduled. You can still show your support by sending flowers directly to the family, or planting a memorial tree in memory of Hildegard Cartier .
Visit the Tribute Store

Share Your Memory of
Hildegard
Upload Your Memory View All Memories
Be the first to upload a memory!
Share A Memory
Send Flowers