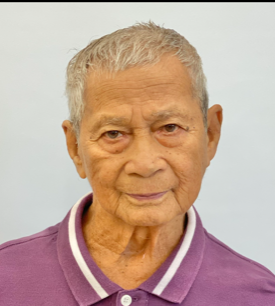 Please share a memory of Leonardo to include in a keepsake book for family and friends.
View Tribute Book
Leonardo Castillo, 86 of East Haven passed away October 11, 2022 at St. Raphael Campus of Yale New Haven Hospital. He was born January 1, 1936 in the Philippines to Justino and Vicenta (Barza) Castillo. Leonardo is survived by his loving wife, Felipa (De Mesa) Castillo and three children, Elmer Castillo (Lisa) of Philippines, Marcel Castillo (Gerry) of Philippines and Marilyn Castillo-Matubis (James) of East Haven along with five grandchildren and one great grandchild. He is preceded in death by his parents and is the last survivor of eight children. He graduated as a Geodetic Engineer and further studied as an undergraduate in Civil Engineering. He worked for Batangas City Engineer’s Office for several years and later worked abroad in the Middle East & in US Naval Base in the British Indian Ocean Territory in Diego Garcia. After his retirement, he came here in the United States with his wife in July 2009 to enjoy his American dream and permanently resided here. Family will receive friends from 4 to 6 P.M. on Friday, October 21, 2022 at the Clancy-Palumbo Funeral Home (Clancy Funeral Home), 43 Kirkham Ave., East Haven. His funeral procession will leave Clancy-Palumbo Funeral Home on Saturday, October 22 at 11:20 A.M. for a Mass of Christian Burial at 11:45 A.M. in St. Pio of Pietrelcina Parish and the Church of Our Lady of Pompeii, 355 Foxon Rd., East Haven. Burial will be private.
Friday
21
October

Share Your Memory of
Leonardo
Upload Your Memory View All Memories
Be the first to upload a memory!
Share A Memory
Send Flowers