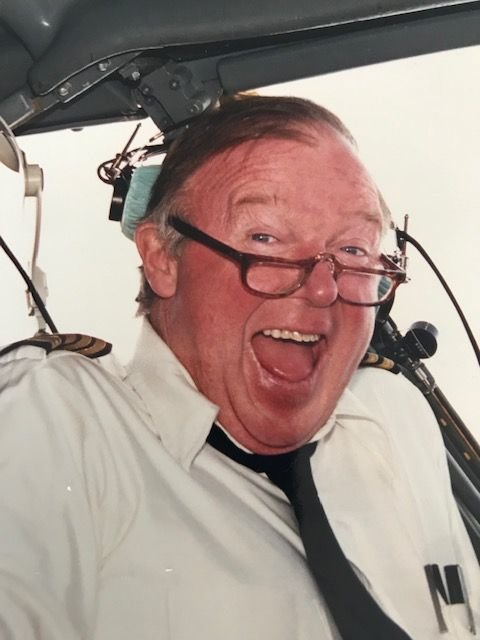 Maurice J. Cahill Jr, “Moe” age 85, of Madison, CT passed away on May 19, 2019 at home surrounded by his wife and family. He was born September 22, 1933 in Worcester, MA to Maurice and Agnes (Donohue) Cahill. Maurice is survived by his loving wife of 62 years, Dorothy (Page) Cahill and three children, Gregory Cahill (Laurel) of Madison, Michael Cahill (Kelley) of Lyme and Caroline Sweitzer (Kenneth) of Old Lyme along with eight grandchildren, who he adored, Paige Cahill, Nicole Cahill, Conor Cahill, Cara Cahill, Chloe Cahill, KC Sweitzer, Samuel Sweitzer, and Sloane Sweitzer. He was preceded in death by his parents and brother, John Ronald Cahill.

Moe graduated Auburn HS in Auburn Ma in 1952. He was a four year standout in four sports. Football, Basketball, Baseball, and Track. Yes, four sports. He completed a PG year at Cushing Academy 1953 and then studied engineering at Lafayette College.

Moe always wanted to be a pilot so he entered flight school in Pensacola, FL in 1955. He earned his wings, joined The Marines, and flew for his country from 1957-1959. Upon receiving his wings, he married his sweetheart Dorothy Page of Worcester, Ma in 1957. They set off on a road trip on route 66 to Balboa, CA.

Moe retired as a Captain from Eastern Airlines in June of 1990 after 31 years in the cockpit. On his days off from flying, he started Appearance Materials in Westbrook in April 1960 with his father in-law Jack Page. Appearance Materials continues to be family run and manufactures and distributes automotive cleaning products throughout New England.

Happiness to Moe was grilling fish & steaks for his family while enjoying a great glass of wine.

Moe was a Founder of Shoreline Bank in Madison which is now Webster Bank. He is also a Past Governor of the Madison Beach Club.

Family and friends are invited to meet and attend a Memorial Service on June 15th at 10 a.m. in The First Congregational Church of Madison, 26 Meetinghouse Lane, Madison CT 06443. Burial to follow on the church grounds with Military Honors. Funeral services are under the care of Clancy-Palumbo Funeral Home, East Haven.

In lieu of flowers, Memorial contributions in Maurice Cahill’s name may be made to The Congregational Church of Madison, 26 Meetinghouse Lane, Madison, CT 06443.

To send flowers to the family or plant a tree in memory of Maurice Cahill, please visit Tribute Store
Saturday
15
June

Share Your Memory of
Maurice
Upload Your Memory View All Memories
Be the first to upload a memory!
Share A Memory
Send Flowers