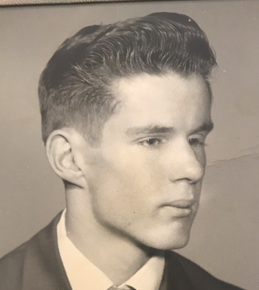 Please share a memory of Sterling to include in a keepsake book for family and friends.
View Tribute Book
Sterling Parker Merwin 87 of East Haven and later New Haven passed away at home on January 30, 2022. He was born July 6, 1934 in East Haven to Louis and Rita (Miller) Merwin. Sterling is survived by his two sons, Paul Merwin (Marianne) of North Haven and Michael Merwin (Sandra) of Alabama along with six grandchildren and three great grandchildren. He is also survived by his sister, Rita Lombardi of New Haven and a brother, Richard “Dickie” Merwin of Branford. Sterling is preceded in death by his parents and three Siblings, Louis Merwin Jr., George Merwin and Shirley Merwin. Sterling was a long -time resident of French Avenue in East Haven and graduated East Haven High School in 1953. He was employed by UTC Sikorsky Aircraft on the Black Hawk Helicopter manufacturing team and retired after 30 years of service. Then he performed a most nobel act and cared for his mother for years until her passing. In his youth, he enjoyed hunting, skiing, boating, motorcycle riding and was a true automobile enthusiast. He was beloved son, brother, father, grandfather, great grandfather and friend. Never forgot a birthday and always celebrated with special card. A personal message to all from Sterling, “Relish the moment.” Family and friends are invited to meet and attend at graveside service on Saturday, February 5, 2022 at 11 A.M. in East Lawn Cemetery, 58 River Street, East Haven. All services are under the care of the Clancy-Palumbo Funeral Home (Clancy Funeral Home), 43 Kirkham Ave., East Haven.
Saturday
5
February

Share Your Memory of
Sterling
Upload Your Memory View All Memories
Be the first to upload a memory!
Share A Memory
Send Flowers